EPMA’s collection of Latin American Art is particularly strong in Spanish colonial paintings from the seventeenth and eighteenth centuries, and nineteenth-century Mexican retablos—the name for intimate domestic devotional paintings on tin or copper, typically produced by anonymous artisans. The museum’s acquisition of retablos has included sizable gifts from the Rodericks, Frank and Sara McKnight, and later the McKnights’ children in honor of their parents. In 2014, the donation of almost five hundred works from the private collection of retablo scholar Nancy Hamilton made the museum the second largest institutional repository of Mexican retablos.

Almost all the Spanish colonial works are religious in nature, a reminder that religion dominated art in the Spanish colonies even more than in Europe at the time. Paintings reflect how artists followed staple European subjects and motifs, and simultaneously developed new cultural and political meanings around other themes. 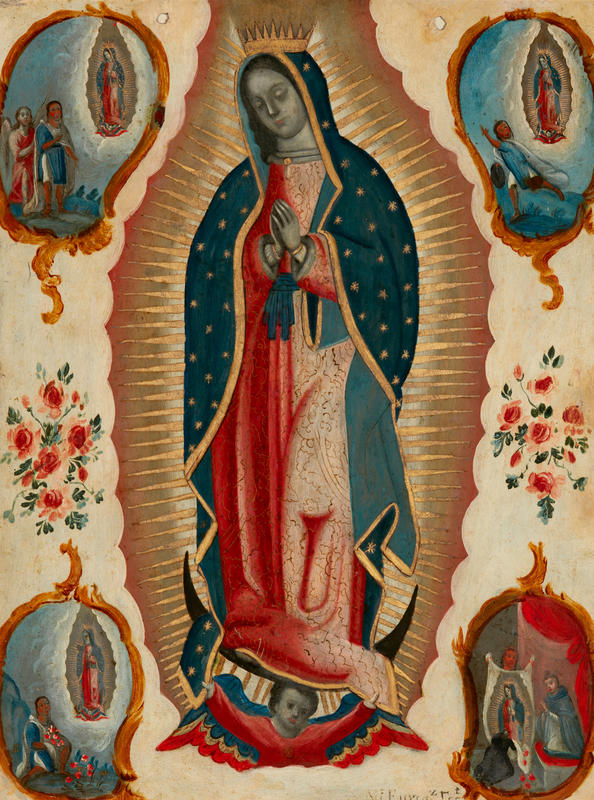 Our Lady of Guadalupe, also known as the Virgin of Guadalupe, is one of the most popular subjects in Mexican retablos. In addition to her status as an object of religious devotion, by the nineteenth century she served as a unifying national symbol. According to official Catholic accounts, the Virgin appeared in a vision to the Mexican peasant Juan Diego on the outskirts of Mexico City. Speaking to him in his native Nahuatl language, she asked for a church to be built there in her honor. Later, her image miraculously appeared on Juan Diego’s cloak as proof of the vision. Today the Basilica of Our Lady of Guadalupe is one of the most visited pilgrimage sites in the world. This colorful retablo by Nicolás Enríquez includes four little bubble vignettes narrating Juan Diego’s encounters with the Virgin.